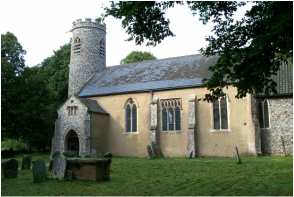 All Saints Church has a service every Sunday which alternates between Evening Prayer, Morning Prayer and Holy Communion.

We also have a weekly Morning Prayer Reflection every Wednesday morning, which begins at 9.30am and last for 30 minutes.  This is a lovely, quiet and contemplative service.  A time to sit with God in a small group as we take some time out of our busy schedules just to 'be'.  Newcomers always welcome.

Gresham, All Saints is supported by The Friends of All Saints, Gresham.


THE ROUND TOWER standing here bears witness to one thousand years of regular Christian worship by the people who have lived in this village without a break over 35 generations.

THE WEST WALL of the church has many large lumps of conglomerate stone and you can see how the church was made wider, possibly in the 14th Century. The original corners may still be discerned and some of the stones are arranged in the ‘long and short woric’ style, so typical of the Saxon period.

Next consider how the tower is circular on the inside and built with the west wall of the church at the same time. So this evidence dates the tower before the Norman Conquest of 1066. This round tower is like other Saxon towers in Norfolk, but lacks the details of original doors and windows. The flints in the tower show some signs of being laid in layers. It is thought likely that no more than ten feet in height would have been built in a year, which would allow time for the mortar to set and would fit in with seasonal work on the land.

The tower had new belfry openings in the 13th Century and then the top was altered. Cotmans drawing in  1818 and Ladbrooke’s in 1824 show a curious octagonal extension. This part was replaced by a battlemented parapet in 1887.

TWO BELLS survive from the former ring of three. The larger one was founded in Norwich by William and Alice Brend in 1615; the smaller one in York by James Smith in 1665.

THE NAVE SOUTH WALL is plastered. Many Norfolk churches originally had some walls plastered where the flint work was less good. Some were whitewashed every spring. Then, in the l9 Century ivy became popular and the plaster was allowed to deteriorate although, in this case, there was no ivy but just decay of the plaster through weathering and so it was re-plastered in 1990.

A PERPENDICULAR PERIOD WINDOW in the centre of the south wall stands out amongst the earlier and narrower windows.

THE PORCH has mostly white flints on the south face that catch the eye as one comes up the church path; it was built with a small room above as can be judged by the pretty little windows which flank the central niche. The stone steps leading up to this room will be found in the southwest corner of the nave and the wear on them shows how much this little room must have been used in the past. There is also a pretty quatrefoil above the porch windows and the gable end is crossed with a ring of glory.

TWO SCRATCH DIALS may be found on your right as you enter the church. Why two. together? Was the first one too small? Both are feint but have prominent holes for the gnomon.

A COTMAN DRAWING dated 1818 is exhibited in the church; it shows the stocks in the churchyard as a solemn reminder of the punishment for civil misbehaviour here.

THE SEVEN SACRAMENT FONT is the pride of this church. It has been less mutilated than others and is one of the best of a type that is peculiar to Norfolk and Suffolk. The scenes given on the eight sides are as follows:

E - The Baptism of Christ (Fig. 3). This is the extra scene to make eight.

SE — Extreme Unction — a dying man propped up in bed anointed with oil and his family all around.

S — Confirmation — Five children in arms are being confirmed.

SW — Baptism — An infant being immersed in an octagonal font.

W — Holy Communion — At the moment of elevation of the Host with two candles on the altar, the Missal (service book) on a cushion and Sanctus bell with rope.

NW — Penance — Satan flies out of the penitent who is being scourged by angel.

N — Holy Matrimony — Priest joining the hands of the couple. The bride wears a pointed headdress.

NE — Ordination — Ordinand kneels before the bishop, who wears a mitre; the archdeacon behind wears a biretta and an acolyte holds a censer.

THE BRASS INSCRIPTION in the floor near the font is dated 1505. Roger Greenwood has found forty-one examples still surviving in Norfolk of this style of lettering which were all made in Norwich over a period of four years.

THE ORGAN was built in Norwich by Mark Noble in 1867 as a chamber organ and given to the church on 1st January 1893 by Mrs. Spurgin a week after the death of her husband, the Rector, who died on Christmas Day, 1892.

THE BLOCKED ARCHWAY at the NE corner of the nave was the entrance to the stairway leading to the rood loft.

THE CHANCEL was built in the early 14th Century. Admire the reticulated tracery of its east window. About this time Gresham Castle was being crenellated by Sir Edmund Bacon. The piscina has a simple circular drain under a pointed arch and was discovered in the last century behind a layer of plaster.

THE STAINED GLASS in the chancel is early Victorian work of the 1850s. At that time good pictorial designs were rare in village churches. The east window repeats IHS’, which is the sacred monogram for ‘Jesus Saviour of Men’ in Latin. The other chancel windows have a geometrical pattern of grisaille with medallions of lilies and roses. By contrast the south nave window has late Victorian glass of 1896 with rich scenes of the Good Shepherd’ and ‘The Light of the World’ on a vine leaf background.

THE MEMORIALS — there are fifteen monuments in the chancel. The earliest is to the Rev. Robert Smith dated 1658, with a Latin inscription that tells us that he was the of the Paston family. The Rev. Francis Arden was rector here for fifty-four years and his family tree includes Leofric, the Earl of Mercia; and Mary Arden, the mother of William Shakespeare. He died in 1855 and his testimonial says that, ‘He determined not to know anything among his people save Jesus Christ and Him crucified.’ The Rev. John Spurgin died in 1893 and we read that, ‘He ever set forth the great doctrine of Justification by Faith only.’ There are six Spurgin memorials all worth reading in full. Then there are six memorials to the Batt family of Gresham Hall, Their crest is a bat (Fig. 4). Gresham Hall was built in 1909 for Reginald Crossley Batt. Three army officers of this family died in the 1st World War (1914—1918).

GRESHAM CASTLE is now only a moated site in a field south of the church. It was the original Manor House until Sir Edmund Bacon crenellated it in 1319. He put a round turret on each corner of the square house. It was sold to the Pastons in 1420 and in 1450 it was attacked and destroyed during the war of the roses whilst Sir John Paston was in London. His wife and twelve servants were driven out by a force of one thousand armed men.

Thomas Chaucer, son of Geoffrey Chaucer, author of ‘The Canterbury Tales’, lived at the farm, still called Chaucer’s Farm, until he sold it to Sir William Paston.

The Gresham family took their narne from this place. Sir Thomas Gresham was a Merchant trader and became financial adviser to four monarchs, Henry VIII, Edward VI, Mary Tudor and Elizabeth I. He built the first Royal Exchange in London, which was opened in 1571 and was visited by Queen Elizabeth. It was burnt down in the Great Fire of London, rebuilt, but burnt down again in 1838. The present building was erected in 1844. Sir Thomas had a fine house in Bishopsgate, London and another at Osterley Park in Middlesex, (now owned by the National Trust). His brother founded Gresham’s School at Holt in 1555.

THE VILLAGE SIGN situated opposite the church, displays the Arms of the Paston family, Thomas Chaucer and his wife, and the Gresham Family. Below is Gresham Castle, a windmill and a watermill. The large grasshopper (Fig. 5) at the top was the crest of the Gresham family.  Being a pun on the name (Gres-grass).

[This information was compiled for Church Tours in 1992 by Richard Butler-Stoney.