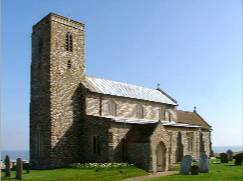 The church is a local landmark as it stands in comparative isolation near the cliff tops.  The late 11th century/early 12th century square tower is unusual for the time when most Norfolk churches were built with round towers which were easier to build.
Inside, the church is a little gem, beautifully proportioned and full of interesting features.  Many visitors also remark on the peaceful atmosphere, reflecting the more than 900 years of worship and devotion.
The church tries to be both modern and traditional and a variety of services are offered.  The New Revised Standard Version of the Bible is used at all services and our hymn book is the Complete Anglican Hymns Old and New.
All Saints is under the patronage of the Duchy of Lancaster.  The living was first linked to the Duchy in 1319 but was not formally part of the Lancaster inheritance until the crowning of Henry IV in 1399.  The parish of Beeston Regis was incorporated in the Benefice of Aylmerton, Runton, Beeston Regis and Gresham in 1999.
The Rector and all members of the congregation at this church hope that you will enjoy your visit to All Saints.

THE CHURCH BUILDING
The tower, built in the late 11th or early 12th century is the oldest part of the building.  The tower arch opening into the nave and much of the nave and chancel walls come from the 13th century.  In the next century however, the church was reconstructed.  The existing arcades were inserted into the nave walls, opening into the aisles, which were built at this time.  The nave was heightened to include the clerestory.  Both the north and the south porches were added and the south porch, through which access to the church is gained, is paved quite unusually with split flints.  The north porch is now used as a cloakroom, installed in 2018.  The tower room was turned into a kitchen a couple of years before that.
In the 15th century the simple arch brace roof, embellished with shields bearing the Instruments of the Passion, was inserted.  It was subject to major reconstruction work in 1870.  The wall posts are also supported by corbels in the form of stone shields only half of which are original.  Once quite plain, these now bear the emblems of St Alban, St Catherine of Alexandria and St Cuthbert, the Venerable Bede, St Margaret of Antioch and St Edmund (King and Martyr, Patron Saint of East Anglia).
In Victorian times the church received much needed restoration, with both the nave and chancel being reseated and the chancel roof raised and it is reported that many treasures were lost.
Further restoration work was carried out in the mid 20th century and in 1947 the north aisle was furnished as St George’s Chapel as a memorial to the Fallen of the two World Wars.  In 1949 the south aisle, originally the Lady Chapel, was furnished, the paneling being copied from the design of the Queen Elizabeth pew in Leeds church, Kent.  In 1951 the tower was carefully restored, with some of the badly weathered coping stones being replaced with modern copies.  The old coping stones were used to form the boundary for the Garden of Remembrance.

IN THE CHURCH
The Rood Screen  This is perhaps the greatest treasure of the church.  Though much restored it originates from the 15th century, having been completed in around 1480, and the painted panels date from that period.  Like many screens this one suffered from neglect and possibly also deliberate damage in the Reformation, the Puritan era and the anti Gothic art movement in the 18th century.  It is known that the remains of the screen were removed to behind the main altar in 1870.  It is from that date that the decision was made to restore the rood and screen.  Parts that were too badly decayed were cut away and the panels placed in the heavy cill.   The uprights and arches together with the new oak groin and canopy were reconstructed. All this work carefully copied similar work in other screens.  In 1914 it was returned to its proper position across the chancel arch.  Norfolk screen work is reputed to be the finest in England and the paintings of equally high standard.

The Altars  The high altar in the chancel dates from 1946.  It is of carved oak and was given in memory of Flying Officer Richard Wyndham Ketton Cremer He was brother of the owner of Felbrigg Hall but more importantly he was the owner of Beeston Hall.  It was Richard’s unfortunate death (he was was killed on active service in Crete in 1941 that resulted in Beeston Hall being used as a school which eventually bought the Hall when opportunity arose. The altar that had stood in the chancel from 1870 was moved in 1947 to the St George’s chapel in the north aisle.  In the south aisle is a very fine Elizabethan communion table.

​The Pulpit and Lectern  The pulpit and lectern are both of carved oak and date from 1870.

The Bell  There is only one bell in the tower now dating from 1610.  There were at one time three other bells but these were sold to pay for repairs in 1765.

The Organ  The present instrument was installed in 1990 coming from St Swithun’s church in Bath.  The gallery for the pipes was constructed at this time.

​Stained Glass Windows  The east window depicting the crucifixion was given in memory of Thomas Wyndham Cremer and dates from 1896.  The small window in the south side of the chancel, representing the child Jesus is in memory of a former rector, William Bosworth, and that on the north side in memory of Priscilla Blake.  The large window on the south side of the chancel depicting St James and St John is in memory of another rector, Henry Fitch.  The Cremer crest is set in the windows at the east ends of the north and south aisles.

​Brasses.  In the centre of the floor of the chancel are the brass effigies of John and Katharine Deynes dated 1527.  This brass was once on the top of a table tomb in the north aisle and a watercolour painting of this tomb is displayed in the church.  A brass from this tomb depicting a skull also survives but is not currently on display.  Other brasses mainly from the 16th century can be seen in the floor of the chancel.  There are also the remains of a 15th century priest’s brass, probably from Beeston Priory, with the evangelical symbol of St Mark still in place.

​Communion Rails  The chancel rails date from the 17th century.

Piscina and Sedila  The proportions of the sedila suggest that it was intended for a larger church and may have come from Beeston Priory.  The window behind was blocked up but was re-opened by the Reverend Cheeseright in 1957 and restored in a style similar to those at the east and west ends of the aisles.

Pews  The pews in the centre of the nave date from Victorian times but those in the aisles contain remains of older pews, possibly 15th century, including the carved pew ends, known as poppyheads, thought to be derived from the French word “poupee” – puppet or figurehead.  There are carved animals on the arms of the old Clerk’s chair.

​OTHER ITEMS OF INTEREST
The churchyard contains two Commonwealth War Graves.
By the door to the north porch are two framed lists of past rectors dating back to the 13th century and a framed display of 19th century communion lace.
The entrance to the stair turret leading to the rood loft has been filled with a grille which marks the coronation of Queen Elizabeth II.
Throughout the pews there are embroidered kneelers made by members of the congregation.  A folder with details of the kneelers is available in the church.
In 2002 the furniture for the children’s corner was donated by the Wright family in memory of Andrew Wright.
The room at the base of the tower now serves as a kitchen with doors which celebrate the Golden Jubilee of the Queen in 2012 and the connections with the Duchy of Lancaster.